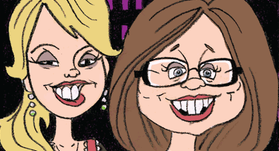 ​Cleaning up after ghosts can be a dirty job,

but someone has to do it!

Theresa is an experienced lecturer, educator, researcher and paranormal investigator and has had many years dealing with spirits, ghosts and paranormal activity.  Theresa has worked beside some of the most well-known experts in the paranormal field, and has been featured by countless media outlets.   Theresa is also author of the book "America's Most Haunted" (Berkley, September 2014)

The Haunted Housewives have been featured frequently on radio, cable, network and local television shows and news programs,  and conference appearances including: